The Fab Four and the Five Elements 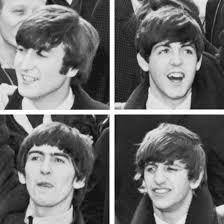 The five elements, EARTH, WATER, FIRE, AIR, SPACE which make up our entire perceivable reality, create the dance in which we can all participate.  One can find these five elements in all of existence and I thought it would be fun noting how the four Beatles could represent each element through their personalities and their unique roles in the group.

I’ve been a total Beatles fan going on many years, ever since my brother gifted me the hot off the press Rubber Soul album.  That was a few years after their infamous debut on the Ed Sullivan Show were I sat, cross legged, in front of the huge, living room console and heard the sound– the one that began the British invasion, influencing the direction of sound and changing musical tastes forever.

Qualities of the elements, from dense to light:

Ringo Starr– EARTH:  solid, stable, the least likely to change or make waves, the foundation on which the other elements depend.

Ringo Starr was The Beatles drummer.  And he is a good representative of the earth element because of his STEADY and SOLID character.  His job was to keep the rest of the group in sync through FIXED and PREDICTABLE beats on his drums, an instrument which is very GROUNDING in and of itself.  Drums put us in touch with our hips, our lower chakras, the part of us that most connects to the earth. Without the FOUNDATION that Ringo was able to provide with his STEADY beat, the rest of the group would have gotten out of rhythm or lost their footing.  Ringo also has a very EARTHY personality with a HEARTY laugh along with a CONSISTENT character, which is the reason why he was the least controversial Beatle.  He was the one who didn’t make waves.  And earth is something that you “Don’t Pass [Me] By” since earthy personalities find it easy to “Act Naturally.”  Ringo, by far, the most STABLE would have been the one to stick with the group thing.

His somewhat UNYIELDING nature can be noted even when they all traveled to India in the 60’s.  He didn’t like the food, so he brought his own and flew back home to his BASE when he ran out of canned beans. Anyway, Ringo was never looking for himself because he was never lost in the first place.  Good old, DEPENDABLE and GROUNDED Ringo was like BEDROCK to the band.

Paul McCartney– WATER: fluid, smooth, flowing, this is where the other elements gather their juice and derive the most inspiration.

Paul McCartney was the bass player, pianist, and was probably the most versatile of the group, musically.  Paul was the main composer of the HARMONIOUS sounds, just as water is the most RHYTHMIC and MELODIOUS of all the elements. His contributions to the group had the FORCE of water, HEAVY and SUBSTANTIAL, yet there was a VERSATILITY that allowed him to easily meld with the most innovative of musicians, including John Lennon and their producer George Martin.   And if you listen and watch Paul being interviewed, his speaking voice has a sing song, FLOWING way about it.  Even his SOFT, baby face indicates the water element.  And his ROUND, dreamy eyes have a FLUIDITY about them as he looks up, down and all around while talking.  Creative, multi-talented, water always finds its way around obstacles in its path.  In India, he was FLUID enough to be interested in George and John’s spiritual pursuits though he was less likely to get pie “in the sky” about it all.  The song, “Why Don’t We Do It In the Road” was written after watching monkeys in Rishikesh acting out their passions.  That’s a quality of water, making the best of a situation and letting gravity take its course.  But water also has a STICKY quality to it, being the only moist element.  It tends to hold on to the past, things that happened “Yesterday.”   Paul was somewhat attached to taking the lead or HEAVY role in the group and water, being a force of nature, was sometimes too WEIGHTY for the others.  Nevertheless, he was faithful in his marriages, being an old fashion type.  And being that water always finds a way–the next group he formed after the Beatles broke up became wildly successful too.  Paul was the JUICIEST Beatle and was able to express that juice through enhanced creativity.

John Lennon– FIRE:  Sharp, hot, intense, he cleared the path for the most change with his heat.

John Lennon played rhythm guitar and was definitely the most FIERY in the band.  Not only does his personality have the qualities of fire, but the SHARP qualities this hot element possesses can also be noted in his physical features:  SHARP nose, ANGULAR body shape and INTENSE eyes.  He also had a STEADY gaze which made some people nervous because he could CUT right through them.  John was famous for his SHARP tongue and did not shy away from controversy because fire likes to CUT to the chase, burning down all perceived excesses in its way.  He possessed a QUICK temper, indicative of fire types and gave everyone a dose of “Instant Karma.”  With a QUICK sense of humor and SHARP mind, he could see the trees through the forest after burning through all the unnecessary rubbish.  John passed on the pleasantries, which is something that water personalities do better with.  INTENSE and to the POINT, he would sometimes blurt out controversial statements like, “The Beatles are more popular than Jesus”, not thinking things through first before speaking; for sometimes fire simply burns out of control.  He also had a HOT temper, noticeable after drinking alcohol, which he could not hold very well.  And was POINTED in his breakup with Cynthia, his first wife, CUTTING her off quickly once he found the airy personality of Yoko to be his ego’s foil. Without the fearlessness of fire, the group would not have been as controversial or as CUTTING edge, TRANSFORMING the status quo.

George Harrison– AIR/SPACE:  clear, light, expansive, space and air is where all the elements can exist at once.

George Harrison played lead guitar and was the QUIET, SOFTER Beatle, some even referred to him as the spiritual one because many of his songs expressed his trying to TOUCH and reach the FORMLESS with heart and soul.  He was the seeker, the one who was able to TOUCH upon experiences relating to the VAST universe.  Om, which he chanted, is the sound that encompasses and holds all other SOUNDS throughout SPACE and is the vibration that EXPANDS physical existence itself.  Space knows NO BOUNDARIES, especially in regards to this reality which easily flows “Within You and Without You.”  Space is the LIGHT, TRANSPARENT element that serves as the canvas on which all of the other elements play.  “All Thing Must Pass” in the physical world, anyway.   Probably the least grounded Beatle, George was able to CONNECT to the ethers in a profound way, understanding that there was a lot more to this world than the eye could see.  And he seemed to have a CLEAR vision of these other, nonphysical realities.  His second wife, Olivia, said that George didn’t relish “Living in the Material World” and never wanted to return once he left his body.  George also was not a main contributor to the songs played on the Beatles albums–as he let the others have their way, allowing fire and water to be the forces which work their way easily through air and space.  Space, after all, is the vast foil against which the other elements express themselves.

So there you have it–The Fab Four, a microcosm of everything Across the Universe!